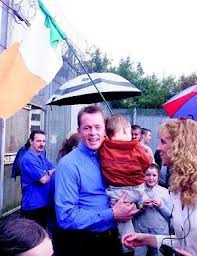 A FORMER leading republican figure who was once a major suspect in the IRA raid on the Northern Bank is facing jail again – this time for a £250,000 mortgage fraud.

And the 48-year-old also pleaded guilty to two counts of possessing £31,718 worth of criminal property.

The couple from Finulagh Road, Castlecaulfield, had been due to stand trial at Belfast Crown Court.

But they changed their plea on Wednesday.

Subsequently, further charges of obtaining services by deception and possessing and converting criminal property were left on the books.

The particulars of the case suggest he inflated his income by £34,500, claiming he had another job and had no other debts.

His wife told the Bank of Ireland that she was a hair salon manageress earning £18,500. The single charge against her dates back 16 years.

She admitted obtaining a money transfer by deception, namely a £52,000 mortgage from the Bank of Ireland between 3 November 1996 and 10 January 1997.

The trial had been due to be heard by a non-jury Diplock court. The couple’s appeal against this was unsuccessful at the High Court.

Arthurs was once a member of Sinn Féin and acted as an election agent on behalf of MP Michelle Gildernew.

In 1995, he was sentenced to 25 years in jail for possessing explosives. He was later released under the terms of the Good Friday Agreement.

In court on Wednesday, sentencing was adjourned for two weeks and the couple were granted bail.

In 2004, Arthurs was held during another series of raids on homes in Co Tyrone.

Arthurs, then aged 40, was arrested in Dungannon while a 43-year-old suspect was detained in Coalisland.

His brother Declan was among an eight-man IRA unit wiped out in an SAS ambush at Loughgall RUC station..

Officers seized a car and dozens of bags containing cash, cheque books, clothes and computer equipment from his house.

Police on both sides of the Irish border have blamed the IRA for clearing the vaults at the Northern’s Belfast city centre HQ last December.

After a 10-month probe into the robbery, all five arrests came in a 36-hour operation.

Along with a man from Newry, another suspect, aged 24 was brought in from Kilcoo  while a 30-year-old man was held in Belfast.

Republicans and Arthurs’ wife Paula were incensed that the father-of-three was suspected of involvement.

“This is all a political exercise, this is to humiliate republicans again,” she said.

In 2008, five Sinn Féin groups, around 90 per cent of the East Tyrone IRA Brigade, left in a protest against Sinn Fein.

Arthurs then said: “No one can deny that there have been changes in the North but it is an equality agenda being pursued. People did not die, they did not take up arms, for equality. They did so for Irish Freedom.

“Yet a huge £100m MI5 building has been built in the North and 5,000 British soldiers remain there. A special British military intelligence unit has just been deployed in Derry.

“David Cameron told the Tory party conference that he was prime minister of Britain and Northern Ireland. He stressed the importance of the union and said, ‘together is how we must remain’.

“Republicans cannot see Irish unity in any of this. It should be remembered that, as republicans, we were committed to fight on until Britain made a declaration of intent to withdraw from Ireland.”

Arthurs said the nationalist community should not “pass on information or collaborate with the PSNI” as Sinn Féin and the SDLP urged,

He added: “Young people now, just like young people during the previous phase of conflict, will continue to be attracted to the republican struggle.

“It can be argued that an armed campaign is not advisable at this point in time but it will never be right to inform on those who decide otherwise.

“It was wrong to pass information to the police 20 or 30 years ago and it is wrong now. The graveyards are full of young republicans put there because a small minority of the nationalist community passed information to the Bristish Forces.”

Arthurs said that the independent republican societies formed in Tyrone, with around 200 members were “non-party political” and were not linked to Republican Sinn Féin, the 32 County Sovereignty Movement, or Éirígí.

Arthurs said that despite long standing reservations about the direction of Sinn Féin’s strategy, they and others had remained loyal to the leadership because they didn’t want to split the movement.

“Two years ago, it reached the point that we couldn’t stay. We were told at a meeting in Tyrone that Sinn Féin’s support for the PSNI wasn’t just a written policy, we had to implement the strategy in full or leave. So we left.”