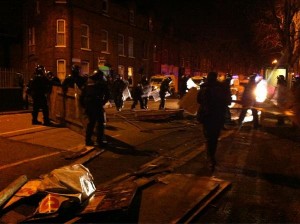 POLICE have condemned rioters who broke into an east Belfast community centre under construction to provide facilities for autistic children.

The building, on Templemore Avenue, is also currently being developed to house an advice centre for local residents.

Scaffolding poles, fencing and parts of the building were broken up and used to attack officers during a flag protest.

Barricades were also erected around Templemore Avenue to keep police out of the street at one stage.

It was the sixth consecutive night of rioting in east Belfast which came after a number of Union flag protests in the area.

In a statement, the PSNI said officers were attacked with petrol bombs, fireworks, bricks and golf balls on the Newtownards Road, before a crowd of about 150 protesters moved into Templemore Avenue.

They said that “from helicopter footage it became clear that individuals had forcibly entered a building owned by East Belfast Community Development Agency”.

The PSNI added that officers entered the street to “physically move the crowd away from the community building”.

Chief Superintendent Alan McCrum said: “Last night we saw a number of people on the streets who were intent on engaging in violence. 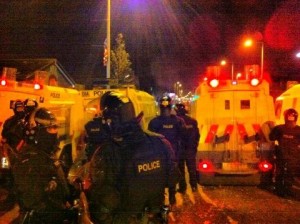 Police come under attack for a sixth night in east Belfast

“They showed no regard for the local community and forcibly entered a premises that is being developed as a multi-purpose community site.”

He added: “Police are committed to bringing those who engage in criminal activity before the courts. Since last Thursday alone, 32 people have been arrested on a range of public disorder offences.”

Since the union flag protests began on 3 December, police have made a total of 107 arrests and have charged 82 people.

In tota, 66 police officers have been injured as a result of violent protests.

Street protests started last month after Belfast City Council voted by 29-21 to only fly the Union flag on 17 designated days.

For the first time since the controversial vote, the Union flag was hoisted over Belfast City Hall to mark the 31st birthday of the Duchess of Cambridge, Kate Middleton.

The Duchess and husband Prince William are expecting their first birthday child who will be third in line to the throne.