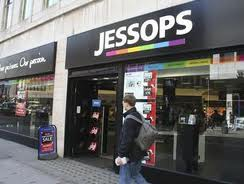 SEVERAL dozen jobs could be lost in Northern Ireland after camera business Jessops hit the financial buffers on Wednesday.

The troubled High Street retailer went into administration, with PricewaterhouseCoopers (PwC) appointed as the administrator.

In recent years, Jessops has been hit by increasing competition from supermarkets and internet retailers.

It has three stores in Northern Ireland – in High Street, Belfast, Lisburn and Ballymena.

The administrators said that it was “inevitable” that some stores would have to close.

PwC said that while Jessops was a well-known brand with a strong reputation for service, its core marketplace had seen a significant decline in 2012, which was forecast to continue in 2013.

Despite additional funding being made available, Jessops had not generated the profits it had planned, PwC added.

In 2009, Jessops managed to avoid administration by agreeing a debt for equity swap with its lender HSBC.

Jessops becomes the first High Street casualty of 2013, following a raft of firms falling into administration in 2012 including Comet, Clinton Cards, JJB Sports and Game Group.