THE PSNI have revealed that 70 people have been arrested and 50 put before the courts charged with public order offences since Union flag protests started.

And over the five weeks of protests, some of which have resulted in serious street violence, 52 frontline police officers have been injured.

Five males have been charged in relation to street violence which broke out in east Belfast on Saturday.

Seven people were arrested when disorder began in the Lower Newtownards Road area.

The men are due to appear at a special sitting of Belfast Magistrates’ Court on Sunday.

Loyalists have been infuriated since Belfast City Council voted by 29-21 to only fly the Union flag on 17 designated days of the year.

On Sunday, following a third night of loyalist rioting in east Belfast, PSNI Chief Constable Matt Baggott praised the tireless courage of his officers during what he described as a “very difficult” time.

A police statement said that street violence began on Saturday at 2.50pm when officers were confronted by a number of people on the Newtownards Road.

“Police were then attacked by a crowd of over 100 people throwing petrol bombs fireworks, smoke cannisters, bricks and other masonry. Laser pens were also directed at officers’ faces. Water cannon were then deployed,” the statement continued. 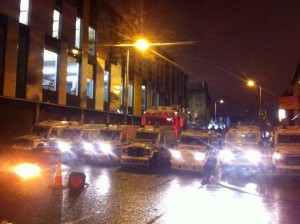 “Later in the afternoon police arrested a 38-year-old man on suspicion of attempted murder after reports that shots had been fired.”

However, loyalists have disputed the police version of events claiming they were first attacked by nationalists from the neighbouring Short Strand district.

The PSNI said the disorder was contained at around 6pm, however, it reignited a short time later at 7.30pm in the Albertbridge, Castlereagh Street and Templemore Avenue areas.

“Three AEP ‘baton rounds’ were fired during the disturbances and one officer was injured. Seven people were arrested,” the statement confirmed.

Reports of cars being set on fire at Templemore Avenue, Albertbridge Road, Newtownards Road and Lord Street were also received by police.

The chief constable said: “You may be assured there will be sufficient resources in the event of more disorder for however long is necessary.

“The Police Service will continue to do everything possible to maintain law and order and we will deal firmly with outbreaks of violence.

“As you have seen in the last few days we will continue to apprehend and put people before the courts.”