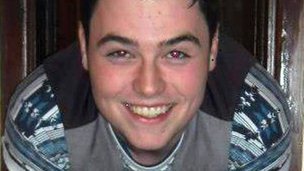 Five in court over murder of Jason McGovern

FOUR men and a juvenile have appeared in court charged in connection with the murder of teenager Jason McGovern.

But a court hears a sixth suspect has left the jurisdiction to go on a trip to Australia.

The 19-year-old was found dea in Co Monaghan after he was twice assaulted in Omagh last Sunday.

They are all charged with unlawfully fighting causing an affray in the early hours of New Year’s Eve.

He was found dead at a friend’s house in County Monaghan on New Year’s Eve.

The court heard that he had left Emyvale with five friends last Sunday night, arriving in Omagh just before 11pm.