HUNDREDS of Union flag protestors have brought Belfast city centre to a standstill on Saturday. 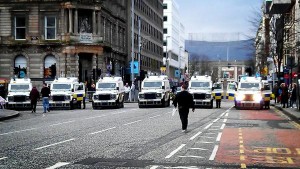 Speaking at the City Hall, Mr Frazer said:  “People are coming together. They are sick of it.”