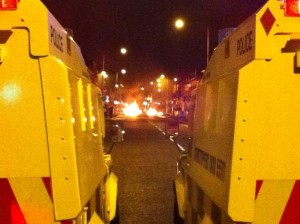 EXCLUSIVE: POLICE chiefs have warned officers on the ground loyalist paramilitaries are preparing to use guns against them as the Union flag protests escalate.

The PSNI said that riot squad officers came under sustained attack during serious disorder in east Belfast on Friday night.

Nine police officers were injured during the “sustained” trouble in east Belfast after officers came under attack from 30 petrol bombs, masonry, bottles and missiles.

A total of 18 arrests were made by police snatch squads.

Three arrests were made in Dundonald after police cleared a protest in the Robbs Road area near the Ulster Hospital.

In Newtownabbey, bottles and bricks were thrown at police with officer being hurt.

The trouble which lasted several hours happened at O’Neill Road area. One person was arrested.

There was also reports of an attempt to hijack a bus. Commercial premises were broken into by several masked men, who damaged the property and stole a sum of money.

“Police will be seeking further arrests in the coming days in relation to the disorder,” said the PSNI statement.

“Anyone with any information about any of these incidents is asked to contact their local police station on 0845 600 8000,” the statement said.

Belfast Daily understands that intelligence reports warned police chiefs that loyalist paramilitaries, in particular the UVF, were prepared to use live rounds against PSNI officers sent in to quell trouble in east Belfast.

And in a stark warning, one intelligence report bluntly suggested: “We are heading back to civil war in Belfast.”

Petrol bombs, bricks and fireworks have been thrown at officers after trouble erupted for a second consecutive night in the Castlereagh Street and Templemore Avenue areas.

A PSNI spokesman said crowds of up to 300 people were involved in the ongoing disorder.

“A number of officers have been injured and several arrests made,” he said.

“Police continue to advise motorists to avoid the area.”

The sporadic violence intensified during the night and four water cannon was deployed to the scene.

A total of 39 police land rovers were mobilised into the area, totalling almost 200 officers. 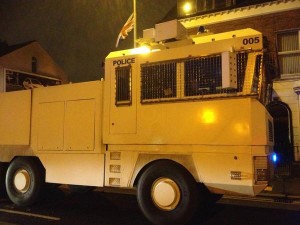 Earlier in the evening a loyalist flag protest was held at Woodstock Link.

Security sources said loyalists were now preparing to abandoning “peaceful protests” in favour of violent confrontations with the PSNI.

“If people don’t pull back now, we are heading back into to the bad old days.

“We have been told that certain loyalist paramilitary groups, in particular the UVF, will open fire on police if batons are discharged.”

However, loyalist sources claimed the PSNI were “stoking the flames” in east Belfast.

“Once they start hitting women and children, nobody is going to stand in the way of anyone attacking the police.

“As far as grass roots loyalists are concerned, the PSNI are doing the bidding of Sinn Fein.

“People are no longer prepared to tolerate a police force who are acting on behalf of Sinn Fein.”

The recent violence has been condemned by First Minister Peter Robinson.