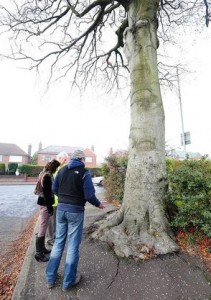 IT took a ‘trunk’ phone call from SDLP MLA Alex Attwood to save Belfast’s oldest tree from government ‘axe men’.

Residents in Glastonbury Avenue, north Belfast almost had a wood in their eyes when Roads Service staff came out last month to give the beech tree the chop after its roots started to shoot through the footpath.

And the 150-year-old tree was given the ‘special branch’ out-of-bounds treatment when Environment Minister Alex Attword stepped in with a Tree Preservation Order (TPO).

The TPO was served on December 14 to safeguard the 40ft tree “for its widespread public amenity value”.

“I became aware of local concern regarding the future of the tree towards the end of November and instructed that the decision was progressed quickly,” the SDLP minister said on Sunday.

Minister Alex Attwood steps in to save Belfast’s oldest tree

“The tree is the oldest and tallest street tree in Belfast and, whilst street trees are generally well cared for by Belfast City Council on behalf of DRD Roads Service, I opted for a precautionary approach in this instance.

“The Department now has six months to decide whether or not to confirm the TPO.”