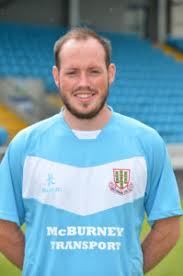 THE January transfer is only open a few days and already Dungannon Swifts have been active.

The Co Tyrone team have signed striker James Costello from Ballymena Utd on an 18-month contract.

Swifts boss Darren Murphy is seeking to sign more players in a bid to help lift his team from 10th place in the Danske Bank Irish Premier League.

Costello has only been at the Sky Blues 19 months after agreeing to leave Glenavon in June 2011.

He had a strike rate of just over one goal in every five games for Ballymena in his first season, earning him the Northern Ireland Football Writers Association Player of the Month for April.

And last November, he was part of Glenn Ferguson’s team who beat Linfield in the final of the Co Antrim Shield in a penalty shoot out.


One Response to SWIFTS SWOOP FOR BALLYMENA STRIKER COSTELLO