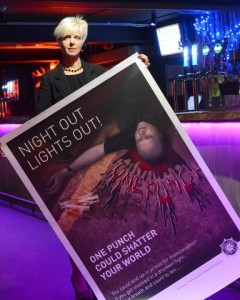 THE PSNI want the public to stay safe on New Year’s and enjoy the celebrations to ring in 2013.

However, police have also launched an initiative to remind the public of the risks of getting involved in an argument or fight which could ultimately lead to serious injury or death.

The One Punch initiative has been launched by Detective Chief Inspector Karen Baxter.

The DCI said: “December is traditionally a busy month for local nightclubs and restaurants with revellers celebrating the festivities.

” In such cases the offender will likely face a murder or manslaughter charge and have a criminal record for the rest of their life.