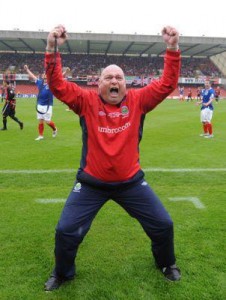 IT’S third versus first in the clash of New Year’s Day in the Danske Bank Irish Premier League.

Last year, Linfield beat Cliftonville 4-1 on their way to winning the league and as our picture shows manager David Jeffrey was more than happy with the result.

However, there has been a revival in Cliftonville’s fortunes in the 2012/2013 season under manager Tommy Breslin.

They are currenlty nine points ahead of second-placed Crusaders and have a game in hand over the Shore Road men as they start the New Year campaign.

Fourth placed Glentoran, who have just signed a new sponsorship deal with A.McLean bookmakers, travel up the M2 to take on Coleraine who had a great start to the season but recent results have seen the Bannsiders slide down the table.