THREE dissident republican suspects who were arrested over a murder bid on a police officer with an under car bomb were released on Wednesday evening.

The two men, aged 25 and 34, were detained during intelligence-led swoops in Belfast on Monday.

A third man, aged 41, was detained in west Belfast on Tuesday evening.

The trio were all taken to the Antrim Serious Crime Suite under the Terrorsim Act 2005 on suspicion of attempted murder and conspiracy to cause an explosion.

All have now been released unconditionally.

Detectives from the PSNI’s Serious Crime Branch are investigating the attempted murder of the police officer and his family on Sunday, December 30.

Senior Investigating Officer Detective Inspector Dickson said: “At this stage we believe that the device was left underneath the officer’s car sometime between 5.30pm on Friday 28 December and 2pm on Sunday 30 December.

“My investigation team want to speak to anyone who was in the area of the Upper Newtownards Road between the junction of the Knock Road and Knockdene Park.”

Police particularly want to speak to anyone who may have seen anything suspicious in the area, like a parked vehicle or someone acting untoward.

On Sunday dissident republicans tried to kill a police officer in a last ditched bid to take a security force life before the New Year.

Groups such as Oglaigh na hEireann and the ‘New IRA’ have been plotting for weeks to kill a police officer with an under car booby trap bomb.

It is part of a plan to grab international headlines and raise funds from anti-peace process supporters in America.

Belfast Daily revealed several weeks ago that Oglaigh na hEireann had a number of security force targets in their sights.

As well as grabbing international media headlines, ONH also wanted to flush out two high ranking informants it believed were working for the PSNI’s C3 Intelligence Branch of MI5.

On Sunday afternoon around 2pm, a viable bomb was discovered under the car of serving police officer in east Belfast.

The UCBT device was found outside the policeman’s house on the Upper Newtownards Road area.

Officers believe the bomb was placed at some time in the past 48 hours and said it was “clearly intended to kill”.

The married officer, who has been in the PSNI for the past eight years, discovered the device just before he went to take his wife and two children to lunch.

Asssitant Chief Constable George Hamilton said: “It is very fortunate that this device was detected before it exploded and that no one was killed or seriously injured.

“It was clearly intended to kill the police officer. His family and neighbours in the vicinity were also put at risk of serious harm.

“Our belief is that this attempted murder was carried by those opposed to peace from within Dissident Republicanism. 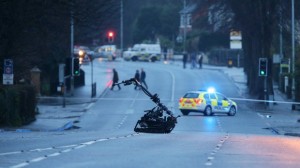 Several homes have been evacuated in the Upper Newtownards Road area as army bomb squad officers deal with the suspect device on Sunday afternoon.

“It seems that an under car booby trap or a device of some sort has been found beneath a car rumoured to belong to a police officer.

“A device like that doesn’t know who’s in the vehicle. It could be his wife, children or grandchildren – it’s a thoughtless act of premeditated violence.”

SDLP Policing Board member Conall McDevitt condemned what he described as a “cynical and deplorable” attempt to target an officer.

He said: “Those seeking to target police officers are undermining not only the stated will of the people of Ireland who have long since rejected violence, but also the desire for a new beginning for policing in the North, which is shared by the majority of citizens.”

The Police Federation described the attack as a “total disregard for life of the officer and family”.

DUP MLA Robin Newton said the bomb was a clear bid to murder the police officer.

“Those who placed this potential bomb have nothing to offer the community except heartache and sorrow,” said the DUP man.

“The thugs who carry out this type of an action are rejected by the vast majority of the community as being wicked and evil and wicked who care nothing for innocent life.

“I pay tribute to the PSNI officers and the bomb squad officers who risked their lives to make the area safe not only for the intended victim but all who live in close proximity.”

East Belfast Alliance MLA Chris Lyttle said: “My immediate thoughts and prayers are with the officer and family directly affected by this cowardly and futile act and the people working to restore safety to all residents in the area.

“Those behind this incident have absolutely nothing to offer the local community and are only intent on taking Northern Ireland back to a time of deep division through violent attacks.”

” The bravery of the PSNI is in stark contrast to the afctions of those who planted a bomb under this family’s car just days after Christmas.”

Police have appealed for anyone with information to get in touch.

ACC George Hamilton continued: “Anyone who was in the area of the Upper Newtownards Road and witnessed any unusual activity in or around this area between the junction of Cabinhill Park and the Knock Road between Friday afternoon and lunch time today is asked to contact detectives on 0845 600 8000.”

And they severely maimed Constable Peadar Heffron in 2010 as he drover to work in Co Antrim.