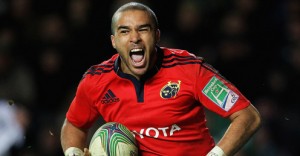 Starved of territory for long stretches of a pedestrian first period, a late push yielded a penalty try for Munster who went to the break 10-3 in front.

The gap was out to 14 points when Simon Zebo split the defence five minutes after the break, and Peter O’Mahony soon crashed over for the third try.

But Munster were unable to fashion a fourth for the bonus point, and Ulster gained a late consolation score when replacement Ali Birch finished off a fine three-man move.

Both sides were guilty of coughing up possession, Damien Varley’s side entry at a midfield ruck allowing O’Connor to kick the Ulstermen level.

The Munster forwards – with BJ Botha to the fore – hammered away through a series of five-metre scrums, and the pressure eventually told as referee Alain Rolland awarded a 34th minute penalty try.

Keatley converted and Ulster came under further pressure after scrum half Paul Marshall saw yellow for ‘unnecessary use of the boot’ on Donncha O’Callaghan at a ruck.

O’Connor stepped in to play scrum half while Marshall was off, and just before his return Zebo struck for the hosts’ second try.

Fed in midfield, Zebo sauntered through an ominous gap with Lewis Stevenson caught for pace and the covering Adam D’Arcy unable to catch the Munster winger as he glided in by the posts.

Keatley added the extras for a 17-3 scoreline and five minutes later, O’Mahony bounced off Luke Marshall’s tackle and with support from O’Donnell, muscled over on a close range drive.

Luke Marshall continued to pose problems with some strong carries, but Munster had the game within their grasp if not the bonus point.

It never came and although the result sees Munster now just a point behind the second-placed Scarlets and ten behind front-running Ulster, they will be frustrated by how they finished this derby tie.

His flicked pass inside reached Robbie Diack, who fed the onrushing Birch for a well worked try which Olding converted with the last kick.