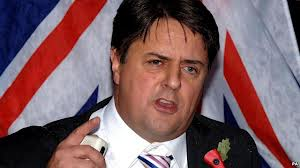 EXCLUSIVE: THE British National Party is trying to use political unrest in Northern Ireland as a vote winner for its cause.

The race hate party wants to garner the rise in anti-DUP/UUP feeling on the streets of Belfast and turn it into votes for its party.

It comes as loyalists start back on the street protest trail as part of its ‘Operation Shutdown’ policy to try and bring Northern Ireland to a standstill.

As Belfast Daily revealed on Friday, protestors will be urging shopkeepers not to serve PSNI officers as they accuse them of doing “Sinn Fein’s dirty work” over the Union flag.

The BNP, led by MEP Nick Griffin, has yet to crack the political hustings in Northern Ireland despite at one time setting up a base in Dundonald, east Belfast to promote its political views and raise election funds.

Now loyalist sources said the BNP are trying to muscle in on Northern Ireland’s political scene in an effort to recruit new candidates and new voters.

And sources said they believed that Nick Griffin will come to Belfast in the New Year to seek the views of loyalists in supporting his party.

“The BNP are sitting in England looking at the political unrest in Northern Ireland and thinking to themselves this is our opportunity to get in there and establish a firm base,” said a loyalist source.

“As far as many loyalists are concerned, they will not be voting for the DUP or the UUP again because of what happened at Belfast City Hall over the Union flag.

“Many feel let down by these two parties and will be looking to vote for someone else.”

The only alternatives would be the Progressive Unionist Party and the Ulster Political Research Group, the political wings of the UVF and UDA respectively.

“But if the BNP decide to run again I can’t see many loyalists supporting them because of their political baggage, except maybe extreme racial elements within loyalism who may support the ideal of a ‘white only nation’.

“The choice loyalists are left with is the PUP and UPRG.  If another political party emerges that can speak for grass roots loyalists people may give it a punt. It can’t be any worse than what is on offer at the moment.”

The source added that momentum was now building behind the idea of ‘The People’s Forum’, the brainchild of former FAIR director Willie Frazer.

It has been set up to oppose the Unionist Forum established by DUP leader Peter Robinson and UUP leader Mike Nesbitt as an umbrella group for unionists and loyalists.

But as Belfast Daily revealed last week, Mr Frazer wants nothing to with the Unionist Forum.

He told supporters over the social networking site Facebook: “I would urge you all to get organised in your area and nominate a few people to come along and represent you at “The peoples forum”. (sic)

Protestors were back at Belfast City Hall on Saturday lunchtime to voice their anger over the council’s decision to vote by 29-21 to only fly the Union flag on 17 designated days of the year.

On Saturday, an updated list of protests was distributed: 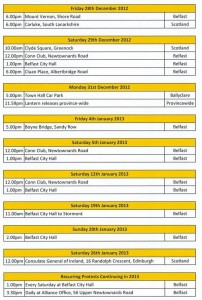 
One Response to REVEALED: BNP USE UNION FLAG PROTESTS AS COVER TO TARGET NEW VOTERS