REVEALED: PSNI NAB 134 DRINK DRIVERS IN RUN UP TO CHRISTMAS 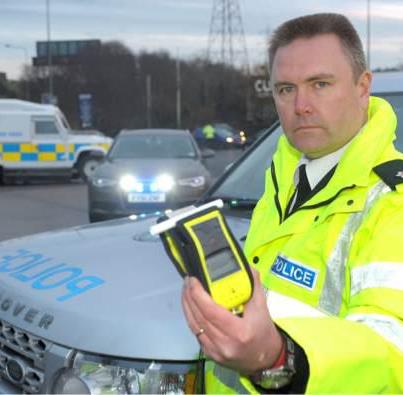 A PSNI Christmas drink-drive crackdown has detected 134 motorists who were over the legal limit, police have revealed.

The detections have been made since November 29 as police patrols step up their clampdown on those who get behind the wheel while above the limit.

The PSNI said: “If you suspect someone may drink and drive, please stop them. If they won’t listen then please report them to us, a drink driver is a driver who is prepared to kill, we need to stop them.

“Many licensed premises are offering Buy one get one free (BOGOF) soft drinks for designated drivers and the taxis are looking for business, there is just no excuse for it.

“Please held us put a stop to it,” added the PSNI

In the worst case, a man was arrested in Newtownards after alcohol was detected on his breath.

The PSNI revealed that officers from B section arrested a man in Comber, Co Down on Sunday, December 2.

An Ards PSNI inspector said: “He admitted to drinking 10 pints before driving.

“He subsequently blew 190 on the evidential breath test machine in Bangor custody suite. The limit is 35.

“It beggars belief that after all the warnings and obvious consequences, people are still prepared to take the risk.

“Sadly he will not be the last person to lose his licence (and more) over the Christmas period.

“I just hope nobody loses their life,” added the inspector.

The arrest of the man comes just days after the PSNI launched its Christmas anti-drink driving campaign.

His message to motorists was very simple: “Not even one’ – because just one drink can kill.”

Out of those found to be over the limit, the youngest was 16 years and the oldest was 76 years, with an average age of 35.

Almost 6,500 breath tests were carried out, of which 348 male drivers and 59 female drivers were detected as being over the legal limit.

“People don’t accidentally have a beer or glass of wine, they make a conscious decision. It only takes one drink to impair your decision making ability. The only right decision is to leave the car or motorbike at home if you’re drinking,” said Supt Purdon

“Some of these people were so drunk, they could barely stand up, it just beggars belief that some people still insist on attempting to drive after drinking.”

In the weeks leading up to Christmas, police officers will run targeted operations to detect drink drivers as well as acoordinated road safety operations across the border counties with An Garda Síochána Traffic Corp.

“If you find yourself asking the question, I wonder if I’m ok to drive? Or if you find yourself trying to calculate if you are under the drink drive limit, whether that’s after one drink, or the morning after a night out, just don’t take the risk,” Supt Purdon added.

drink drivers have been detected by PSNI since 29th November.


2 Responses to REVEALED: PSNI NAB 134 DRINK DRIVERS IN RUN UP TO CHRISTMAS