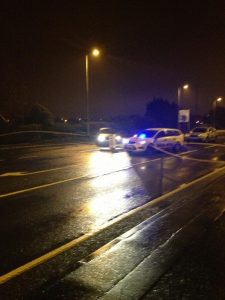 AN OFF-DUTY POLICEMAN has cheated death on Wednesday evening during a murder bid in Co Down.

The shooting incident happend in the Springhill area of Bangor around 7.30 pm.

It is understood the gun man fired at the off-duty officer but missed.

The policeman escaped uninjured in the incident which is now the subject of an investigation by detectives from the PSNI’s Serious Crime Branch.

In a follow-up operation, two men, aged 45 and 60, were arrested and taken in for questioning.

Chief Constable Matt Baggott has been informed of the attack on one of his officers.

The PSNI said: “Police are currently dealing with an incident in the Bangor West area. No one was injured.

“As a result traffic will be disrupted in the area. At this stage we can’t comment any further.”

A motive for the attack is still being investigated but it is not believed to be terrorist related at this stage.

The murder bid has been condemned by local politicians.

DUP MLA Alex Easton said: “I am deeply shocked that someone has tried to shoot someone in the Bangor area.

“This is deeply, deeply worrying. This is not what we want to see in our streets and I would appeal to anyone who has any information to come forward to the police.”

DUP councillor Alan Graham said: “Nowhere is safe. It’s about people going into an area where people think they are safe. These people just have to get lucky once.”