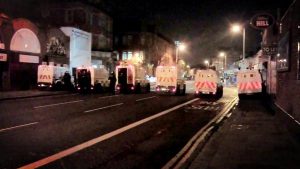 Police in riot gear on the Albertbridge Road

A PLANNED province-wide protest is underway across Northern Ireland on Monday evening in the latest development in the Union flag row.

All police leave has been cancelled as the PSNI bolster resources in an effort to try and keep the roads clear for rush hour commuters.

However, already there are reports of a number of roads which have been temporarily closed to traffic.

There are said to be road blocks on the Newtownards Road, the Shore Road at Mount Vernon, Tates Avenue and Templemore Avenue in east Belfast.

The Ormeau Road in south Belfast was closed but is now reopened. 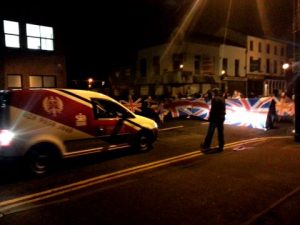 Donegall Pass close to the PSNI station is also closed.

A peaceful protest is also taking place in Ballyduff and Monkstown in east Antrim.

The protests are among around 60 which are due to take place on Monday right across Northern Ireland.

They come despite calls from Northern Ireland’s most senior politicians for them to end so political dialogue can take place.

Earlier on Monday afternoon, Assistant Chief Constable Dave Jones said: “We are aware of a number of planned protests across Northern Ireland this evening and are determined to do everything we can to ensure people can go about their normal business.

“People have a right to go about their daily lives, to shop and to socialise, to pick up their children on time and get home to their families without being held up by these protests. 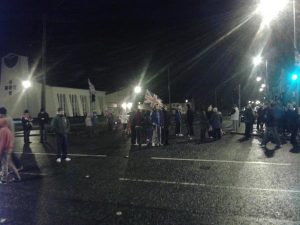 “The vast majority of all communities in Northern Ireland simply want to enjoy the festive period with their friends and families in peace.

“We will continue to have sufficient resources in place to deal with this activity and will endeavour to keep disruption to a minimum.

“However, I am appealing to those wishing to protest to consider how their actions are affecting the wider community.

“Police remain fully committed to delivering a safe and secure Christmas for everyone. An extensive evidence gathering operation will be put in place and where appropriate people will be brought before the courts.”

In a message on Monday, loyalists were urged to mobilise across the province and bring roads to a standstill.

“Take to the street, every estate, road, town and city in this country.

“We need to bring this country to a standstill.

“The police won’t be out in force as they won’t have the numbers.

“A peaceful protest and then a message will hopefully get through.

“Text or ring your friends and family who don’t have Facebook and let them know.

“If your are going to take part in a whole country peaceful protest share this message and get the message across. Thanks.”