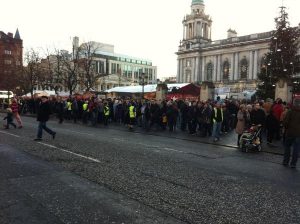 A PEACE rally at Belfast City Hall on Sunday morning has drawn a crowd of 1,200, police say.

Organisers said the demonstration is about “promoting peace and showing the world that Northern Ireland has moved on from the Troubles”.

However, it is 2,000 less than organisers had hoped for.

People have brought tambourines, drums and other instruments to make noise at the rally. Motorists driving past the rally have been sounding their car horns.

Leaflets were also handed about the setting up of a Northern Ireland Progressive Party for those fed up with “the bigotss” in the province.

The PSNI said: “This morning police were at the City Hall to cover a Peace Rally there.

“The event was very well organised and passed off without incident.

“The rally was well attended and highlighted growing concerns in respect of ongoing protests, disruption and incidents of violence.”

It comes after several hundred campaigners, including church leaders, linked arms around City Hall in an early morning peace vigil on Saturday. 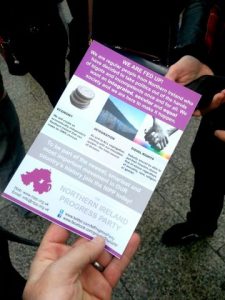 Leaflets for the Northern Ireland Progressive Party handed out at rally

Shoppers fled in terror and it again hit the pockets of hard pressed traders on the second busiest day of the year.

Nothing was found by police during a sweep of the sprawling complex but it left shop owners counting the cost of another ruined Saturday trading.

The bomb warning came against a back drop of violence which has flared in recent weeks following Belfast councillors’ decision to stop flying the Union flag from the building all year round.

The latest in a series of protests saw around 1,000 loyalists protest peacefully in city centre on Saturday amid a heavy police presence.

PUP leader Billy Hutchinson said the process surrounding the removal of the flag was “flawed” and “illegal” and suggested it may be possible to put it back.

Forty people have been arrested so far in connection with the disorder – according to the PSNI, 28 of them have been charged with a range of offences, including rioting, disorderly behaviour, resisting arrest and assault on police.

Almost 30 police officers have been injured, meanwhile a number of politicians have been subjected to death threats.

The cross-community peace rally is due to begin at around 11am outside the gates of City Hall.