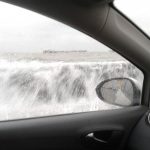 IT is a case of batten down the hatches on Friday as a weather warning is in force.

Police have advised motorists and pedestrians to stay clear of the south promenade in Newcastle, Co Down as it is flooded.

Strong winds have whipped up seas waves which are battering the promenade wall.

Such is the forces of the gales that the water is breaking over the promenade wall but cannot escape down the street drains.

The Met Office has issued a yellow warning which will remain in place throughout Friday morning and through the afternoon.

The east coast of Northern Ireland will bear the brunt of the wind and heavy rain.

There will be high tides and winds could reach speeds of up to 50 mph.

People living in eastern coastal areas are warned to be on their guard over spray and high waves.

Weather men expect up to 30mm of rain to fall in places as the UK takes a battering from gusting winds and an advancing band of rain.

The DoE has also advised motorists and pedestrians to exercise caution along coastal roads and paths because of the rain and winds.

And even though the weather will ease by Friday afternoon, the forecast for the next few days is get to worse.

The Met Office is warning of heavy for over the weekend and into next week.


One Response to WEATHER WARNING AS FLOODS SHUT NEWCASTLE PROMENADE