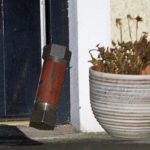 DETECTIVES are probing a pipe attack on the home of a press photographer in Co Down.

However, Mark Pearce, who has been taking pictures for 20 years, believes he may have been the victim of mistaken identity.

In the middle of the night he was forced to get his family of young children and his partner out of their home after a knock on the door from police.

“There was a policeman who came in and said: ‘Listen, there’s a device at the front of the house – we need you to evacuate the house’,” said a shaken Mr Pearce.

The police visit and security alert just after midnight followed a telephone warning from a pay phone.

He added: “We were escorted out the side of the house and taken away. At the exact same time, we saw the same thing happening to our neighbours.”

A pipe bomb had been left propped against the front door and Army bomb disposal experts were called to the house in the Carraig Crosain area of Mayobridge.

Six houses had to be evacuated, with Mark and his family taken to another neighbour’s home.

“For the next four hours, we sat in fear,” he said.

“Police explained that it was a viable device and that we were very lucky.”

But the photographer can’t understand why he and his family were targeted, as he has never covered the type of stories that could be perceived as controversial.

“I cannot understand how I could have offended somebody so much that they would endanger myself, my children, my partner,” Mark said.

“I’m not an undercover photographer – I cover news and public relations. I cannot grasp why my children’s lives were put in danger.”

Mark’s family and his neighbours were allowed to return to their homes at about 5.30am.

Detectives in Newry are investigating and have appealed for information.