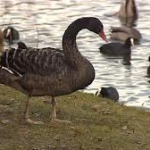 Is this Michelle the Black Swan from Donegal?

A RARE Australian black swan which turned up in north Belfast this week could be just 70 miles from its owner’s home.

For Sir Gerry Robinson from Co Donegal believes the black swan found at the Waterworks off the Antrim Road could be from his Oakfield estate.

The female swan called Michelle disappeared from a pond in Raphoe in May!

And she has been causing a bit of a flap among bird lovers after finding a new home at the WaterWorks – a wildlife reserve in the middle of north Belfast.

“We got the swans in December last year and named them Barack and Michelle and Michelle disappeared in May,” said Sir Gerry today.

“We did a lot of publicity trying to find her and now she has turned up, it’s terrific.

“She now has two young swans to look after which hopefully will keep her very much in position.

“We are convinced it is her.

“It is very unlikely not to be because black swans are a very rare thing in this part of the world.

“From what we’ve seen she looks precisely like ours with exactly the right combination of black and those white feathers underneath the wings.”

Arrangements are being made today to capture Michelle – and return her home to Donegal.