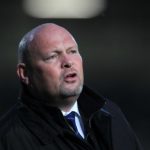 IT could be the match that makes or breaks Linfield’s season.

And it could also be the match that could seal manager David Jeffrey’s fate.

Just days after Crusaders beat Linfield 1-0 in the semi-final of the IRN-BRU League Cup, the Blues have been drawn against the Shore Road men in the fifth round of the Irish Cup to be played on January 5, 2013.

Linfield will have to win to keep their season alive and also safe ‘Big Davy’s career at Windsor Park.

It is one of three all Irish Premier League ties which will add a bit of spice to the matches and give lowly teams the chance to reach the sixth round: