GAA BROTHERS CHARGED OVER MURDER OF SEX OFFENDER AND HIS PARTNER

TWO GAA playing brothers have appeared in court in the Republic on Wednesday charged with a brutal double murder in Co Armagh six years ago.

Sex offender Thomas O’Hare, 33, and his 21-year-old partner Lisa McClatchy were doused in petrol and set on fire by a gang of men at their home in Foley Road close to Keady in November 2006.

Martin Smith, 40, from Kevlin Glen in Omagh and 37-year-old Niall Smith of Mourneview, Mowhan in Armagh are charged with the attack.

The brothers were arrested by Gardaí from the extradition unit at addresses in Dundalk Co Louth and Balbriggan in Co Dublin.

Both face two charges of murder and one of arson.

At a Dublin court on Wednesday, Sergeant Martin O’Neill said when he asked Martin Smith if he knew what the arrest was about, Smith shook his head.

Sergeant Jim Kirwan, who arrested Niall Smith, said the accused told him, “I don’t want to say something about that to Gardaí until I speak to my solicitor.”

Both men were remanded in custody to appear before Judge John Edwards next week when their lawyers are expected to indicate whether they will contest the extradition bid by the PSNI.

Thomas O’Hare died in hospital from his horrific burns days after a gang burst into his home in south Armagh.

O’Hare was suspected locally of abusing an eight-year-old boy. 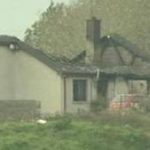 McClatchey, who knew nothing of O’Hare’s past, was described by local people as a complete innocent caught up in the apparent revenge attack. She too later died after suffering 80 per cent burns.

She and O’Hare were at home in his house near the village of Keady on Monday night when the four men burst in.

Two of them, aged 24 and 34, were transferred to St James’s Hospital in Dublin where their conditions yesterday remained serious.

All four are from Newtownhamilton in south Armagh, but two have been living in Dublin.

For the past six years, Gardai have been liaising with the PSNI over the investigation.

At the time of the murders, a 43-year-old man was arrested by the PSNI in the Co Armagh area on suspicion of murder, attempted murder and arson.

Local people said O’Hare and McClatchey had only moved into the house at Foley, outside Keady, in recent months.