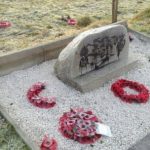 SECTARIAN thugs have for the fifth time vandalised a memorial to three Scots soldiers lured to their deaths in an IRA honey trap operation.

The PUP and the Royal British Legion have condemned this latest attack – the second in just over a year.

The monument, at White Brae, Ligoneil, commemorates three fusiliers from Scotland who were killed in March 1971.

John MacVicar, from the local Royal British Legion branch, said paint has been poured over the memorial and on wreaths.

He said vandals also tried to break the granite in the attack on Tuesday night.

The memorial was erected three years ago at the site where the bodies of teenage brothers John and Joseph McCaig, and their 23-year-old colleague Dougald McCaughey, were found more than three decades before.

Mr MacVicar, who helped raise funds to build the monument, is the secretary of Oldpark/Cavehill Royal British Legion branch.

He said he believed it was a “sectarian hate attack”.

“This is now the fifth time the memorial has been attacked since it was unveiled in 2009. The damage caused the last time cost in excess of £1500 to repair.

“There is absolutely no doubt that this is a further attempt by republicans to remove from history the fact that the IRA murdered three young boys, two brothers aged 17 and 18 and the third aged 23 who were unarmed and out for an off duty afternoon in Belfast in 1971 simply because they were in the British Army.”

Last July, sectarian graffiti was scrawled on the memorial stone. Corner posts, and the surrounding rope were also broken.