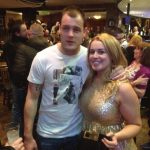 CELTIC player Anthony Stokes has been disciplined by his Glasgow club for attending a benefit night in memory of murder Real IRA chief Alan Ryan.

He was shot dead in Dublin in September in a feud with a criminal gang.

A bar owned by the Stokes family hosted the event, during which a band played ‘The Ballad of Alan Ryan’.

On the day of Ryan’s funeral, Stokes wrote “Thinking of you Alan…” on his Twitter account, which led to death threats.

Celtic boss Neil Lennon said: “I am not going to moralise to him, but you cannot damage the reputation of the club.”

However, he did not detail how the incident involving the Ireland international had been handled, but said disciplinary action had been taken.

He said: “We spoke to him. He is aware of that now. It has been dealt with internally.”

Lennon said he believed Stokes had damaged Celtic’s reputation but thought the 24-year-old player had learned from the incident.

Ryan, 32, was the head of the Real IRA in Dublin was gunned down in broad daylight, and a volley of shots was fired at his funeral. It is alleged his faction was behind extortion rackets in the city.

Stokes signed a four year deal with Celtic in August 2010, after spells with Sunderland, Arsenal and Falkirk. He earned his first international cap for the Republic of Ireland against San Marino in February 2007, but has been out on injury since July. 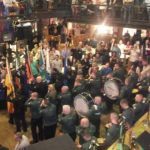 Stokes and his agent declined to comment on his attendance at the party last night.