DETECTIVES have launched a murder bid probe after a patrol car carrying a policewoman was petrol-bombed outside the east Belfast office of Alliance MP Naomi Long on Monday evening. 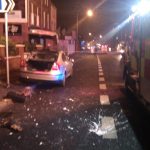 The attack came as Unionist political leaders met to forge a united strategy over the Union Jack flag row.

The serious escalation in street violence has been condemned by politicians.

“What we are seeing is mob rule. We are making arrests and we will continue to make arrests. An investigation is ongoing and I hope to bring people before the courts.

“We will deal with disorder as firmly as possible,” added the Chief Constable.”

The Northern Ireland Policing Board have also accused condemned the murder bid on the policewoman and the ongoing violence,

“These were disgraceful attacks on PSNI officers in Belfast last night.  So fortunate that no one was seriously hurt.

“Our thoughts are with all the officers who have been on duty and particularly the officer whose car was attacked. This must stop now.”

Shadow Northern Ireland Secretary Vernon Coaker said on Monday night: “I have called on the Secretary of State to make an urgent statement to the House of Commons about the ongoing violence in Northern Ireland.”

Theresa Villiers will make a statement to the Commons on Wednesday about the violence.

The deadly attack on the police car came during the latest protests over the decision of Belfsat City Council to only fly the Union flag on 17 designated days.

A petrol bomb was thrown inside but a female officer in the silver Skoda Octavia car managed to escape unhurt.

It is being seen as a serious escalation in the protest in the week long Union flag row.

‘This was a planned attempt to kill a Police Officer which also put the lives of the public in danger,” said ACC Hamilton.

It said: “Fifteen rioters wielding iron bars smash up police car then try to incinerate 2 officers inside with petrol bombs

“These barbaric attempted murders will only strengthen our resolve to protect the community.”

He added: “This is no different from an attack on police by dissident republicans.”

Alliance Leader David Ford MLA said police officers could have been killed in a petrol bomb attack on their vehicle outside an Alliance Party Office on the Upper Newtownards Road.

Mr Ford said: “The PSNI serve everybody in the community. There can never be any justification for any attack on our police officers.

“This attack served no purpose and must be condemned by all. Tonight we could have been looking at the deaths of police officers. This was an attempt to kill police officers.

“While I respect the right to peaceful protest, it is clear that there is a need for these protests to end due to the violence and the increased tensions on the streets.”

East Belfast MP Naomi Long MP said: “My thoughts are with the police officers who were there to serve the community and have been viciously attacked while carrying out their duties.

“There can be no justification for attacks on the police, elected representatives or anyone else

“If Northern Ireland is to move forward then we need a strict adherence to the rule of law and respect for the democratic process. We need this urgently before lives are lost.”

And she also hit out at Prime Minister David Cameron who has remained silent on the loyalist protest.

She added: “We have not heard from David Cameron about these attacks. If this was any other part of UK, I’m sure we would have by now.”

He said: “The petrol bombing of a police car in East Belfast is an utter disgrace and does nothing but damage the loyalist cause.”

In another dangerous development, a public house belonging to a Sinn Fein councillor in Armagh was attacked.

At 10 pm on Monday night, the PSNI advised advised to avoid the Mountpottinger Road and Castlereagh Street area of east Belfast.

The attack on two police officers was the most serious incident during protests on Monday, the majority of which passed off peacefully.

However, violence broke out in the Village area of south Belfast after officers came under attack. 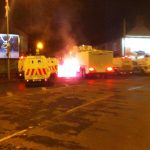 Missiles, including masonry, fireworks and bottles, have been thrown at officers in the Tavanagh Street and Broadway areas.

While a 200-strong protest with flags and placards at Broadway roundabout has now ended, a small number of people remain.

A stand-off has developed between police and protestors at the Broadway roundabout.

Motorists are still advised to avoid the area, due to debris on the roads.

Rush hour traffic throughout the city was hit by major delays on Monday evening, as loyalists blocked a number of main routes.

Earlier in east Belfast, the Upper Newtownards Road was blocked for a time by hundreds of protestors and police urged people to be aware of the potential impact on the nearby Ulster Hospital.

“Protestors are reminded that this is bringing serious disruption to the lives of the local community and that a peaceful protest can only be facilitated for a limited time,” the PSNI spokesman said.

“The priority must be ensuring free access to the Ulster Hospital and preservation of life.

“We would ask everyone to heed police instructions and keep the road clear to ensure access to the Ulster Hospital is not blocked and that traffic is not delayed.”

In Lisburn, the Queens Road has been blocked by protestors and diversions are in place.

In north Belfast, the Crumlin Road was closed for a time between its junction with Cambria Street and Hesketh Road – also due to a protest in the area.

Police also monitored protests throughout the evening at Finaghy crossroads, Shaws Bridge, Seymour Hill in Dunmurry, and on the Ormeau Road.

Traffic came to a standstill for a time when protestors gathered at Ormeau Bridge, before being moved down Annadale Embankment by police.

Meanwhile, in Ballyclare around 140 people protested at the town’s square, while a protest was also held in Limavady. And in Ballycastle, protestors gathered outside Moyle District Council offices.

Motorists in all affected areas are being advised to seek alternative routes. 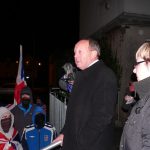 In Ballycastle this evening, TUV leader Jim Allister addressed protestors and told them they didn’t need “masks or violence” over the flag issue.

As the protests got underway, DUP leader Peter Robinson met his Ulster Unionist Party counterpart Mike Nesbitt for talks in what is being seen as a possible pact on the way between the two parties over the flag issue.

In a joint statement following the hour-long talks, the unionis leaders said that they had “agreed to work on a joint basis with a view to urgently bringing forward political proposals to address widespread concerns across the community”.

They say further discussions will be held on Tuesday in order to “finalise a strategy”.