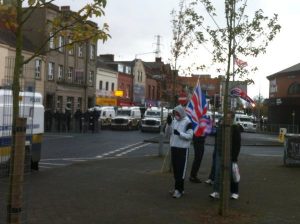 THREE teenage boys are due in court on Monday following trouble in Newtownabbey on Saturday evening.

The boys, two aged 13 and one 14-year-old, were arrested after trouble erupted in the O’Neill Road area.

They are facing charges including riot, riotous behaviour and criminal damage.

On Saturday evening, police said they were dealing with “minor disorder” and set up diversions in the area.

The boys are due to appear at Belfast Youth Court.

The clashes follow a protest in Belfast city centre against the council’s decision to restrict the flying of the Union flag from the city hall.

Meanwhile a 14-year-old boy has been charged with public order offences after disorder broke out in Belfast on Saturday. He is due to appear at Belfast Youth Court on Monday

A 17-year-old boy has also been charged over the same incident and is due to appear at court next month.