CROWDS GATHER FOR PROTESTS AGAINST DROPPING OF UNION FLAG 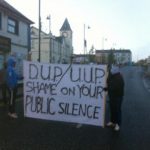 PROTESTORS are gathering across Northern Ireland to voice their anger over the removal of the Union flag at Belfast City Hall.

In Ballyclare, protestors held up a banned saying:  DUP/UUP Shame On Your Public Silence. 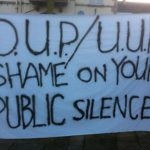 Protestors gather on Monday in Ballyclare