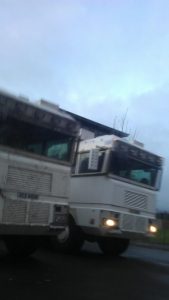 TWO police water cannon guard over the Alliance Party office in east Belfast over fears the UVF plan to burn it down.

Scores of armoured police vehicles are in the area to stop a UVF gaining entry and setting it on fire.

Although he has said the UVF is not involved in the trouble he has called on the east Belfast leadership of Stephen Matthews to halt the trouble.

As a car was burned out in east Belfast, police chiefs draft in extra resources to east Belfast on Saturday afternoon as protestors clash with police.

Crowds of youths, many wearing masks to hide their faces, are gathering along the Newtownards Road at the Holywood Arches.

Police said on Saturday evening that a 15 year old male has been arrested on suspicion of riotous assembly and criminal damage in the Holywood Road area of east Belfast.

One police officer has been injured but it is believed he was struck by masonry and not a police vehicle as earlier reported. The officer is now being treated in hospital.

Water cannon and other police riot units are heading to east Belfast over PSNI fears that widespread public disorder is about to erupt. 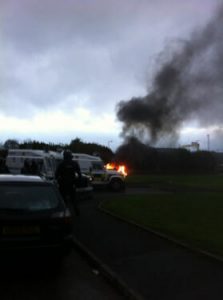 It followed some of the worst nights of violence on Friday night in which police were attacked with petrol bombs and missiles.

And cars were hijacked and set on fire in a serious escalation of street protests over the flying of the Union flag at Belfast City Hall.

A further protest is planned for Belfast City Centre on Saturday afternoon. Police numbers have been stepped in the town ahead of the protest.

Two water cannon and further police reinforcements have been despatched to the city centre to quell any trouble.

Belfast Daily revealed on Wednesday that loyalists were planning to ratchet up their protests.

We revealed that senior police commanders were warned of the escalation following a briefing by intelligence chiefs at PSNI headquarters.

Following Friday night’s violence, eight PSNI officers were injured after being attacked in Shaftesbury Square at Belfast’s ‘Golden Mile’, and in Crumlin Road and Ligoniel Road areas in the north of the city.

Shaftsbury Square comes under the control UDA south Belfast brigadier Jackie McDonald. He has made no comment on the trouble as yet.

Three officers were taken to hospital for treatment and were later discharged.

Two men aged 18 and 19 are due to appear at Belfast Magistrates’ Court in relation with the disorder.

The man in charge of the PSNI’s urban region finally confirmed that the violence was being orchestrated by paramilitaries. 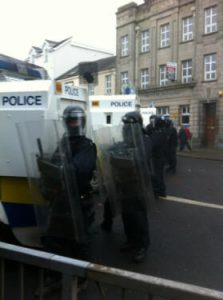 Riot cops with shields at the ready

Assistant Chief Constable Will Kerr said “senior figures in the UDA and UVF” are organising the violent protests.

“Police can now confirm loyalist paramilitaries are orchestrating some of the violence we have seen in the past 24 hours,” said ACC Kerr.

“Violence has serious and unwanted consequences for us all and we will robustly investigate all incidents.”

ACC Kerr previously described the disorder as “mob violence” which he said was “unacceptable”.

“We are warning anyone who does engage in criminal activity that they will face the full rigours of the law.

Trouble also flared in the O’Neill Road area of Newtownabbey as a crowd of around 70 people blocked the road and attacked police with bricks and masonry on Friday night.

Two petrol bombs were thrown at police vehicles, which were damaged during the disturbances.

Eight men were arrested by police following the disorder in the area.

A 17-year-old teenager has been charged with assault on police, disorderly behaviour and resisting arrest. He is due to appear at Belfast Youth Court on Saturday. 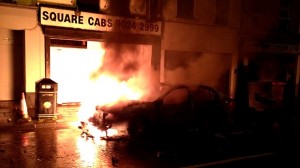