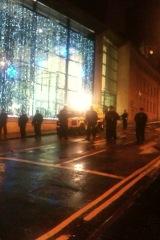 Riot police on patrol in Ballymena

LOYALISTS are planning a further protest at Belfast City Hall on Friday morning.

Social networking sites have told loyalists to turn up for the 10 am protest at the rear gate.

It comes as US Secretary of State Hillary Clinton flies into the eye of a political storm whipped up across Northern Ireland over the Union flag.

Violence broke out in Ballymena on Thursday evenig after about 150 people descended on the Town Hall in the Linenhall Street area for a protest over the removal of the Union flag at Belfast City Hall.

Most of the crowd dispersed as it concluded but a small number remain in the area.

Police liaised with local community representatives regarding the situation in efforts to restore calm.

There was also reports of that crowds had gathered in the Harryville area and motorists took diversion tactics to avoid it.

During the trouble, one PSNI officer suffered a minor injury.

Two police vehicles and two privately owned vehicles were damaged and the window of a commercial premises was broken.

Missiles thrown at police in Ballymena

The Ballymena trouble came despite a plea from DUP First Minister Peter Robinson for all protests to be suspended.

On Thursday afternoon, the PSNI warned some businesses in Lisburn near an Alliance Party office that they were expecting trouble on Friday.

Mr Robinson’s plea for a suspension of the protests fell on deaf ideas as hardline loyalists had agreed a plan to escalate its civil disobedience from Belfast to unionist and loyalist towns across the province.

Three people were arrested. One was released and two men, aged 27 and 21, were charged on Thursday night with public disorder offences.

Both are due to appear at Belfast Magistrates Court on Friday morning.

Earlier on Thursday, staff at the Boys Model School in north Belfast were sent home home early because of a planned protest in Ballysillan on Thursday evening.

The arrival of Hillary Clinton on Friday will cause an extra security headache for the PSNI who are trying to manage resources to quell loyalist trouble.

The US Secretary of State will be briefed by US Consular officials on the current political situation in Northern Ireland.

However, this week’s violence will overshadow her last trip to the province as US Secretary of State.