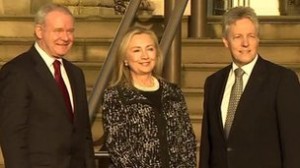 US Secretary Hillary Cliinton in Belfast

The threat was revealed as US Secretary of State Hillary Clinton arrived in Belfast amid tight security.

When asked about the death threat against East Belfast Alliance MP Naomi Long, she said: “I know her and am distressed about her and attacks on Alliance. It’s unacceptable”.

She added: “We have seen this week the work is not complete and I join in condemning the recent attacks.

“There will always be disagreements in democratic society but violence is never an acceptable response,” said Mrs Clinton who is on a four day trip across Europe which started in Dublin on Thursday.

It may be one of her last foreign engagements as Washington’s most senior diplomat.

Her visit came amid tensions over the decision to stop flying the union flag at Belfast City Hall every day.

Nationalists at Belfast City Council had wanted the flag taken down altogether, but in the end voted on a compromise from Alliance that it would fly on designated days.

On Friday, the Alliance Party revealed there had been a death threat against its East Belfast MP Naomi Long.

A Sinn Fein councillor on Belfast City Council, Jim McVeigh, has confirmed he has also received a death threat.

There have been loyalist protests and disturbances after Belfast City Council voted to fly the union flag at city hall only on designated days.

On Wednesday night, an Alliance party office was destroyed and the home of two councillors attacked.

The Alliance party has said Naomi Long was advised to leave her home on Thursday night and not to go to her constituency office on Friday.

That evening she appeared on the BBC’s political programme The View to discuss the week’s turbulent events along with DUP North Belfast MP Nigel Dodds.

However, when asked about her own personal security, Mrs Long refused to discuss it on air.

The MP has said the threat will not stop her doing her constituency work.

“I recognise that there are strong feelings about the issue of flags, on both sides; however, in a democracy these arguments have to be made in a peaceful way,” she said.

“I refuse to allow this threat to stop me from delivering the valuable constituency service which I have developed since first elected in 2001, a service to all of the people of east Belfast.

“This is not an attack on an individual or on a party, but a wanton attack on the democratic process. It is long past time that this vicious campaign of intimidation and violence was brought to a permanent end.”

Earlier in the week threats were also made against Alliance councillor Laura McNamee and Sinn Fein MLA Gerry Kelly.

A police spokesperson said the PSNI did not comment on an individuals security but said any reports of threats that had been made against any member of the public would be investigated.

First Minister Peter Robinson, who dramatically lost his east Belfast seat to Naomi Long, condemned those responsible for issuing a death threat against her.

“Such threats are an affront to democracy and an attack on us all. As someone who in the past has been visited many times by the police to be told of death threats issued against me, I know how difficult and testing a time this is,” he said.

“My thoughts and prayers are very much with Naomi at this time and I would call upon all concerned not to allow themselves be used by those who have very sinister motives. Regardless of political difference, public representatives should not be attacked or threatened in any way.”

“The death threat against the East Belfast MP Naomi Long is to be condemned in the strongest possible terms and needs to be withdrawn immediately.

“This is the work of fascists who cannot accept the democratic decision of Belfast City Council,” he said.

“Threats remain against Alliance councillor Laura McNamee, Sinn Féin’s Gerry Kelly and councillor Jim McVeigh. Each and everyone of these threats must be lifted.”

The vote was 29 to 21, with unionists accusing Sinn Fein, the SDLP and Alliance of attacking their cultural identity.

Trouble erupted in Belfast on Monday night following the vote which left 15 police officers and a security guard injured.

Associated Press photographer Peter Morrision was hit by police batons on the head and hand despite twice telling PSNI officers he was a photographer.