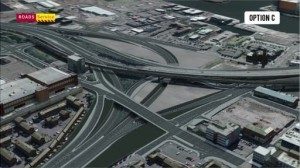 IT WOULD cost almost £100 million, take three years to build and it would be the answer to the prayers of rush-hour motorists.

The Stormont Government on Thursday  unveiled plans that could transform the Westlink and M2 junction in a bid to end traffic conjestion.

The proposed improvement would give motorists continuous links between three of the busiest roads in NI which are used daily by 100,000 motorists.

UUP Transport Minister Danny Kennedy said the project would cost between £100m to £135m and could take three years.

“This junction is one of the main gateways to Belfast and provides access to the Port of Belfast as well as serving strategic traffic travelling between the north, south and east of Northern Ireland,” he said.

“The preferred option is technically very challenging and a great deal of work has been carried out to ensure the buildability and viability of this project which is a high priority within the Roads Service Programme.”

The consultation process is set to continue and there is the possibility of a public inquiry.

It will be at least 2017-18 before the work will begin and it is estimated that it will be 2020 before vehicles are on the road.

Details of the plan: