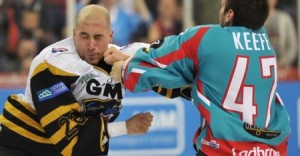 THE STENA Line Belfast Giants take the high road this weekend with two games in two days in Scotland.

They will be looking to stay top of the Elite League even though Northampton in second have a game in hand.

First, the Giants play the Fife Flyers on Saturday and then play the Edinburgh Castles on Sunday. Two weeks ago the Giants beat the Castles 9-1 at the Odyssey Arena.

Last weekend, the Giants lost 3-2 at home to the Nottingham Panthers.

They clawed back a 2-0 deficit to force overtime and penalty shots with the Panthers tallying the extra point with a perfect 3 goals from 3 shots in the shootout decider.

For the second time, on Odyssey ice between these two teams, the game was decided by a penalty shootout.

This time it was a reversal of the score the last time, as Belfast picked up the extra point.

This time it was the visitors who came out on top to remain within touching distance of the league leaders.

The visitors opened the scoring on their first powerplay opportunity at 9.18 as David Ling netted.

They doubled their lead with their second powerplay of the game as Anthony Stewart scored at 16.33.

Just before the end of the first period, Adam Keefe (Giants) and Guilaume Lepine (Panthers) decided they didn’t want to take part at the start of the second period. As they were sin binned for 5 minutes with a fighting major at 19.43.

The next goal in the game was going to be huge for whoever got it. Both teams had chances to get that elusive marker throughout the second period.

It was the home team that finally got the goal, as Craig Peacock fired in on the powerplay at 17.52 to get his team right back into the game.

The game remained tight throughout the third period with only the one goal between the teams and neither team could find that elusive next goal.

That was until Gregory Stewart finally found a way past Kowalski with 30 seconds remaining on the clock to send the game into overtime.

Overtime failed to find a winner and the game was decided by a penalty shootout. Panthers converted all three of theirs, whilst the Giants only had success with one of theirs, therefore it was the visitors who picked up the extra point.