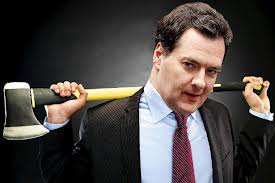 And no plans on how to tackle youth unemployment in Northern Ireland which is higher than the UK average.

Instead, Chancellor George Osborne has launched a cut in benefits which will hit 250,000 people in Northern Ireland, around a sixth of the population.

Benefits will rise by only 1 per cent over the next three years despite the fact that inflation is at 2.8 per cent.

That means those in benefits will be down almost 2 per cent a year in the face of rising costs of food and fuel prices.

George Osborne made his autumn statement to the House of Commons to cheers from the Tory benches to jeers from the Labour opposition.

The chancellor has been forced to extend austerity measures to 2018, but scrapped a planned 3p fuel duty rise.

The Treasury said the Northern Ireland Executive would benefit from an additional £132m of capital spending.

The main boost for big companies is a cut in corporation tax to 21% in 2014. Smaller businesses benefit from a much increased tax break for investing in new plant and equipment.

But there was still no firm decision on whether to cut Northern Ireland’s corporation tax to bring it in line with the Republic’s.

The rich have been spared a property tax but will face a higher tax on their pension pots.

There are infrastructure benefits, including expanding ultrafast broadband in 12 cities, including Londonderry.

The executive will be able to defer £50m of borrowing through the Reinvestment and Reform Initiative from 2012-13 to 2014-15 to help support investment in the A5 road.

The Treasury also said the personal allowance reforms would allow 8,000 people to be lifted out of income tax and 615,000 more to pay less income tax.

The statement added that there was also a £32m research partnership for the Queen’s University Belfast Institute of Health Science.

“The minister said I should ‘wait and see’ what was in the autumn statement,” Mr Coaker said.

“I’ve waited and seen, and the answer is ‘nothing’. The minister needs to realise that it’s not good enough to tell the one in five young people out of work to ‘wait and see’ whether or not there will be any jobs.

“The Westminster government needs to get a grip and take action now to tackle youth unemployment in Northern Ireland.”