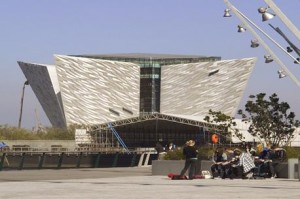 SCENES of violence were supposed to be a thing of the past and Belfast was using the legacy of the Titanic to build a bridge to the future.

And so amid the mayhem of the past day or two come some good news – Belfast has just been named the best UK departure port by website Cruise Critic.

Two cities that played major roles in the Titanic tragedy have won best port awards 100 years after the disaster.

Belfast, where the liner was built, has been named best UK cruise port of call while Southampton, where most of the doomed passengers boarded, was named best UK departure port by website Cruise Critic.

And this is one of the best travel awards going – because it’s given by cruise journalists.

The legend of Titanic was critical to their choice.

The international panel said: “Belfast has regained its former glory thanks to the ship that for many years defined its decay

“The stunning Titanic Belfast Centre has arguably done for Belfast what the Guggenheim did for Bilbao.

“The fact that more and more cruise ships are choosing Belfast as a port of call, seals its number one spot this year.”

Tony McAuley, Commercial Officer at Belfast Harbour, said: ‘We are delighted that the substantial investment made in recent years in providing world class tourism facilities in Belfast and Northern Ireland, such as Titanic Belfast and the Giant’s Causeway visitor centre, is recognised and appreciated by the international cruise community.”