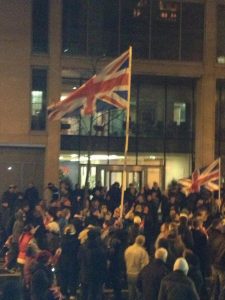 AMID a heavy police presence, loyalist have gathered for Monday evening’s vote at Belfast City Hall over a proposal to remove the Union Jack flag from the building.

So far around 1,000 have converged as councillors gather for the 6pm meeting to vote to dump the flag after 100 years of history.

They have singing ‘Rule Britannia’ and also chanting ‘Leave our Union flag alone.’

Linenhall Street is blocked to the protest, organised by the United Protestant Voice (UPV) over social networking sites, and traffic is diverted to Victoria Street.

Uniform police are on the street at the rear gate to the City Hall.

But in nearby side streets, more half a dozen units of the specialist Tactical Support Group experienced in riot control are placed in case trouble breaks out.

Inside the council chamber, Alliance councillor Marie Hendron has moved her compromise motion for the Union flag to be flown only on designated days.

It came after the DUP failed to get cameras from Republican News excluded from covering the proceedings. 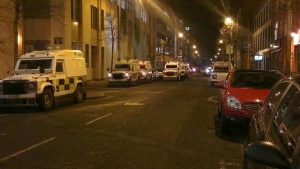 And at the same time, other loyalists are planning to unveil a large Union Jack painted on bed sheets across Black Mountain in west Belfast.

DUP councillor Brian Kingston said he expects a big turnout at the protest just before the 6pm vote.

“It’s clear to me, and from comments that people have made to me personally, this is going to provoke a huge reaction and people are outraged at this attempt to remove our country’s flag, the Union flag, from our city hall,” he explained.

“It seems that many people are intending to come down to show their opposition and there will be protests outside city hall.”

All media eyes will be fixed on Monday night’s full meeting of Belfast City Council to see if councillors ratify the flag removal proposal.

A fortnight ago, the council’s policy and resources committee recommended that the Union flag no longer be flown over Belfast City Hall. 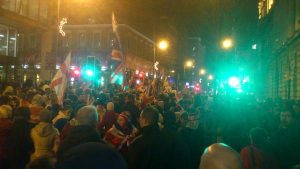 But for the proposal to be successfull it needs to be ratified by a full council.

The committee’s motion was backed by 11-9.

Demographic changes in Belfast now mean that nationalist and republican councillors, who made the proposal, now hold the balance of power in Belfast City Council.

However, the Alliance Party wants to defuse possible tensions with a proposal that the Union flag be flown on designated days just like at Stormont buildings.