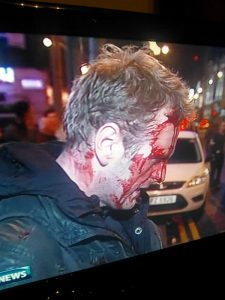 RESIDENTS said on Monday night that loyalists attacked a Catholic Church and homes in east Belfast.

It follows a decision by Belfast City Council to only fly the Union flag on designated days of the year and not the current policy of 365 days.

The flag will come down at midnight on Monday and not be flown again until January.

Residents said gangs of loyalists heading back from Belfast City Hall attacked St Matthews Chapel in the Short Strand and local homes in Strand Walk have been attacked by loyalists linked to the UVF.

The Newtownards Road was closed to all traffic and police put diversions in place after forcing loyalist mob back down the Albertbridge Road.

Gangs then tried to hijack two buses. One driver was able to get away while police took control of a second.

Award-winning Associated Press photographer Peter Morrision said he was hit on head and hand by police batons – even after he TWICE identified himself as a member of the press.

He has been taken to hospital to be treated for his injuries.

A teenage girl was also said to have been injured and was taken to hospital by ambulance.

By 10pm the PSNI were reporting a calmer situation on the streets of Belfast despite attempts by loyalists at the City Hall to burn the Christmas tree down. 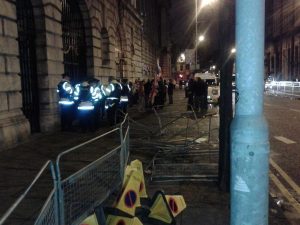 A few loyalists were still at the rear of the City Hall as police stood guard at the gates.

A statement said: “Crowds have dispersed from City Hall and Newtownards Rd.

“Police remain in Albertbridge Rd area while crowds disperse after disorder in area.”

As order was restored in the council chamber it was stormed by a loyalist gang dubbed ‘The Wolf Packs’, outside a stand-off has developed with Linenhill Street blocked as loyalists chant at police lines: We Shall Not Be Moved.

It is understood three Belfast City Council security guards were hurt during the trouble and a young teenage girl who was taken away in an ambulance. 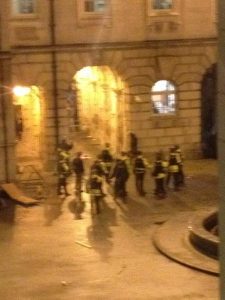 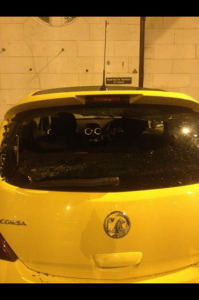 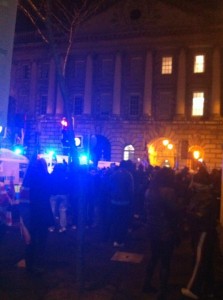