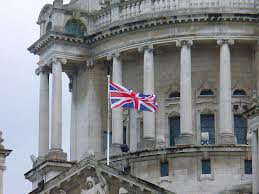 COMPROMISE has erupted at Belfast City Hall on Monday evening against the back drop of a ‘Keep Our Union flag’ protest outside.

And as compromises spreads, the DUP appear to admit defeat before the vote is taken.

Councillor William Humphrey has told the meeting: “You may take our flag down, but you will never destroy our union.”

The SDLP and Sinn Fein now say they will support a motion by Alliance Councillor Marie Hendron that the Union flag should only be flown on designated days.

However, Monday evening’s meeting has appeared to have staved off a bitter political row spilling onto the street.