PICTURE EXCLUSIVE: THIS is the dissident republican spokesman who faced a court on Saturday on a number of terrorism charges.

Stephen Martin Murney, from Derrybeg Terrace in Newry, was charged with collecting and distributing information likely to be of use to terrorists.

The 29-year-old, who is a spokesman for the Newry branch of Eirigi, was also charged with having articles likely to be of use to terrorists.

Murney, who has faced the court previously on assaulting police charges, was remanded in custody until Wednesday, December 12.

A PSNI detective told Newry Magistrates Court that the accused was seen at a protest in support of dissident republican prisoners as the Olympic torch was passing through Newry in June.

The detective said Mr Murney took photographs of police officers on his mobile phone, and the photographs then appeared on his Facebook page.

The detective said police have also seized a laptop computer which contained hundreds of photos of police officers.

But a defence lawyer said these images dated back years and that the computer did not contain photos of serving PSNI officers. 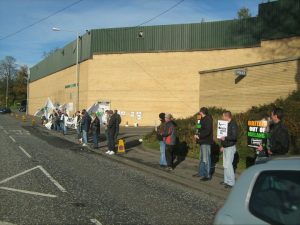 He also claimed the photos taken at the protest were for the purposes of claiming harassment.

The lawyer said the clothes which were seized were band uniforms.

The district judge remanded the accused on the grounds there was a risk he would interfere with the police investigation.

Around 30 Eirigi supporters were in the public gallery for the hearing, including the party’s general secretary Breandan Mac Cionnaith.

As he was led away, Mr Murney raised a clenched fist in the air and his supporters clapped and cheered.

Eirigi recently held protests in Newry calling for an end to police harassment of their supporters.

And they also called for an end to strip searching of republican prisoners in Maghaberry prison.