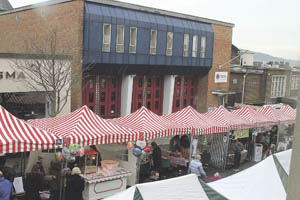 A BLAZING row has engulfed a garrison town after council chiefs blocked off a fire station with Christmas stalls.

Belfast Daily can reveal that fuming fire fighters in Holywood station couldn’t attend two ‘shouts’ for help from the public in what could have been life or death 999 call outs.

It meant they had to call on the help of colleagues at a Belfast station to attend an emergency call to the Lorne Guide Centre in nearby Craigavad.

With the clock ticking down, seething firemen then had to wait for the stalls to be dismantled so they could get into their fire station.

And when they finally got into the Sullivan Place premises they had to move out a fire tender and all the crew’s breathin apparatus kits and set up a makeshift base in the nearby PSNI station.

It wasn’t long before a call came in for a second ‘shout’ at the Ulster Folk and Transport Museum.

Again, a Belfast fire station was called upon to bail their Holywood colleagues.

Luckily for the council, the two ‘shouts’ last Saturday were only ‘Automated Fire Alarm Calls’.

Fire chiefs quickly moved to reassure the public that the situation did not get out of control.

Northern Ireland Fire and Rescue Service said: “At no stage was emergency fire and rescue cover for the area affected.’

“We received two Automatic Fire Alarms calls in Holywood – one before the event and one during the event.

“An applicance from Knock Fire Station responded to both within 41 seconds and 35 seconds respectively. These were both false alarms.”

It said that North Down Borough Council and Holywood’s town centre management had told them about the plans some time ago.

However, the decision to close off Sullivan Place to traffic and block the entrance to Holywood fire station has provoked a heated debate.

The Holywood Watch commander fumed: “It beggars belief that North Down Borough Council and the town centre management would order the closure of a street in which there is an operational fire station and block completely access to and from that station.

“Even if they had left space for the fire applicances to get out, who on the council or the town centre management felt it would be appropriate to have firefighters and their appliances exiting onto temporarily pedestrianised street in an emergency.

“Serious questions have to be asked of this decision,” added Mr McConville who has 30 years fighting fires and saving lives.

But when they raced to their station they found they couldn’t get into the station.

They immediately contacted their ‘control’ to say that the entrance to their station was blocked and they couldn’t get their fire appliances out.

NIFRS bosses then despatched a tender from Knock fire station who then raced the six miles to Holywood.

Neither North Down Borough Council nor Holywood’s town centre management would make any comment.