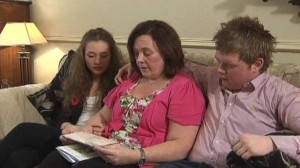 THE widow of the prison officer murdered by dissident republicans a month ago has made a heartfelt plea for public help in finding her husband’s killers.

Yvonne Black, whose husband David was shot dead on his way to work in Magheraberry jail on 1 November, has appealed for anyone with any information about the killing to bring it to the PSNI.

Mrs Black said she and her children, Kyle, 21 and Kyra, 17, had been overwhelmed by the outpouring of sympathy and support they had received since David’s murder.

She said they had been inundated with messages, including many from serving and ex-prisoners who had known her husband.

“They can take daddy away from me and from Kyra and from mummy, his family,” said Kyle.

“But there’s a lot of special memories we will always have and keep in our heart and they can never take that from us.”

However, the prison officer’s son said it was very important that his killers were caught.

She had been asleep when the doorbell rang and by the time she got downstairs she saw a police car pulling out of the drive.

Her uncle and aunt later called to the house to tell her.

“He always had a smile on his face, always,” she said of her father.

“He’s just so caring and loving, he was so special.”

At the funeral, Kyra read a poem she had written describing her father as her “special hero”.