A DAMNING report has found “serious shortfalls” in the care of a convicted horse thief who took her own life in Hydebank Wood prison.

Frances McKeown, 23, who committed suicide in the south Belfast jail in May 2011, had suffered severe mental health problems for a number of years.

A report by Prisoner Ombudsman Pauline McCabe said she told prison staff and health workers she planned to kill herself.

In a suicide note, she wrote: “This is nobody’s fault, it is my choice to die. People wouldn’t listen to me when I told them how bad the voices I hear were, and I just can’t put up with it anymore.

Mrs McCabe revealed that Ms McKeown did not see a psychiatrist until more than six months after she went into the prison.

The Prisoner Ombudsman also said there was evidence other inmates bullied Frances McKeown after they believed she had told prison staff she saw a male officer kissing a female prisoner.

But the ombudsman said it was “unlikely” that the bullying was a “direct cause” of her death.

As a result, the governor of Hydebank Wood, Gary Alcock, was suspended and charged with misconduct. He is working elsewhere in the Prison Service and his job has now been advertised. 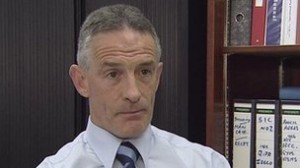 Ms McKeown was in jail awaiting sentencing after being convicted in relation to a hijacking in north Belfast.

She died on the same night as another prisoner, Samuel Carson, took his life in another part of Hydebank Wood.

Ms McKeown kept a journal and wrote letters in jail, in which she recorded details of suicidal thoughts and criticised the prison’s healthcare regime.

They were found after her death and extracts from her writings are included in the ombudsman’s report.

Ms McKeown’s husband Brian has said that while the Prisoner Ombudsman is right to acknowledge the efforts which staff made to support his wife, he is “deeply distressed” by “glaring failures”.

He is planning to sue the authorities.

Mrs McCabe identified 18 “matters of concern” for the South Eastern Health and Social Care Trust and the Prison Service.

The trust has said it accepts the report’s findings and has made a number of improvements to prison health care.

Brendan Whittle, director of adult services and prison healthcare at the trust, said that on the day before she died, Frances had received one-to-one counselling which was “reported to have gone well” and gave “no indication that she was about to take her own life”.

He said that posed “a much broader question” about “whether or not someone in Frances’ circumstances should be committed to prison in the first place”.

However, Mr Whittle said it was not a question for the trust to answer.

“We know from history how hard it is to prevent someone taking their own life when they want to do so, and this is even harder when someone is in custody – especially someone so vulnerable as Frances, with a troubled past.

“Within healthcare in prisons we can mitigate the risks – and the reforms that we have put in place will help us to do that – but we can never eliminate the risks,” Mr Whittle added.

The Prison Service has also said it is addressing the issues in the report, especially the ombudsman’s concern that Frances McKeown was locked up too much.

Director General Sue McAllister said: “I recognise that lock-downs cause difficulties for some prisoners, particularly those who are vulnerable.

“It is my intention to work with governors to reduce the amount of lock downs to an absolute minimum and only use them as a last resort.”

In a journal found by the Prisoner Ombudsman, Frances McKeown wrote: “The voices in my head are getting worse and more violent…. At night when I am in my cell it is worse because I can’t distract myself. All I can do is listen to it and the horrific things it tells me to do.”

On the night she died she wrote: “”This evening the voices are getting really bad. I can’t put up with them much more. There was a code blue tonight on the wee lads’ house… so we are locked all night. If these voices keep up there will be another code blue tonight.”