A sacked NI Water board member started libel proceedings in the High Court in Belfast on Tuesday against Sinn Fein.

A jury of seven was sworn in to hear the case before Mr Justice Mark Horner QC.

The defamation case has been brought by Declan Gormley against Sinn Fein.

Mr Gormely is suing the party for damages to his reputation claiming two Sinn Féin press releases put out last year in support of his sacking were defamatory.

One was issued on the day a Public Accounts Committee report questioned the circumstances of the sackings.

Mr Gormley and three other NI Water directors were sacked by Sinn Fein MLA Conor Murphy, the then Minister for Regional Development.

They were dismissed following an investigation into how contracts were awarded. Mr Gormley denies any wrong-doing. 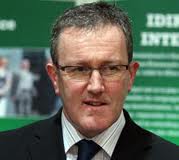 On Tuesday, Mr Gormley’s lawyer, Nicholas Hanna QC told the court that the press releases from Sinn Fein MLA Cathal Boylan stood the findings of the PAC report on its head and added insult to injury. He described one of them as “reckless if not blatantly dishonest”.

Mr Gormley is due to give evidence on Wednesday in the case which is due to last five days.

Conor Murphy MP is expected to be called to give evidence during the hearing in support of the Sinn Fein defence.

Mr Gormley’s claim is being resisted on the grounds of fair comment, qualified privilege and a further defence of justification.

Lawyers for the three defendants had previously sought a preliminary ruling that there was effectively no case to answer.

They claimed the natural and ordinary meaning of the contested statements is not actionable.

Barrister Martin McCann told an earlier hearing: “There is nothing defamatory in either of these, on any plain reading of them.

“What Mr Gormley really is complaining about is that he was sacked.”

Nicolas Hanna QC, representing Mr Gormley, argued that reference was made to his client being dismissed over a “procurement scandal”.

He said: “The plaintiff is making the case that the words in the press statement meant he was culpable, responsible, that he was to blame for this procurement scandal.”

Mr Hanna also accused the defendants of being “highly selective” in their interpretation of a Public Accounts Committee report central to the case.

“Far from vindicating the sacking of Mr Gormley, it does the opposite,” he said.