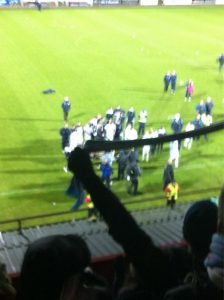 IT TOOK a dramatic penalty shoot out for Ballymena Utd to win their first trophy in almost a quarter of a century.

And the famous win over Linfield will fuel further the speculation among the fans about the future of manager David Jeffrey.

Alan Davidson walked up and slotted home his penalty to win the shoot out 4-3 for Ballymena Utd.

He was handed the task after Linfield’s Daryl Fordyce missed his penalty from the spot at the Oval.

Davidson’s penalty sent their travelling fans wild with excitement – they haven’t seen a piece of silverware in 23 years!!

It was the first trophy as a manager for Glenn Ferguson – he already has 30 medals as a player with Linfield.

On Tuesday night, he finally got revenge over his old boss David Jeffrey after two recent defeats of 8-0 and 2-1.

But David Jeffrey won’t be happy that his team had a number of chances to see off Ballymena and didn’t take them.

Davy Munster put Ballymena ahead on 23 minutes in a lack lustre half which seen Linfield fans moaning on social networking sites about their poor first half performance.

In the second half Linfield looked livelier but still couldn’t hit the target until a penalty shout.

Davy Munster went from hero to zero when he fouled Carvill and McCaul slotted home.

After 15 minutes each way of extra time the two teams went head to head for a nail biting penalty shoot out.

He said afterwards: “I have been practising penalties. It certainly paid off tonight. I’m delighted for the Ballymena fans.”

And after a silverware drought, Ballymena headed up the M2 to the Showgrounds with the Co Antrim Shield – the fifth time they have won it in their history.