POLICE will keep a watchful eye today over a pro-Palestinian rally in Belfast city centre. 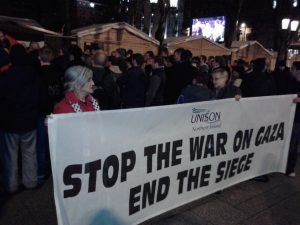 Students have organised a march in support of Palestinians with protestors asked to turn up at the Art College in York Street at 11.45 am.

Said a student: “It is in solidarity with the people of Palestine and to expose the Israeli war machine.”

The rally comes after ‘SUPPORT HAMAS’ appeared in large white writing on the top of Black Mountain in west Belfast on Friday night.

Police were alerted to the activity and sent up its ‘hawkeye’ helicopter with infra red equipment to monitor those involved.

Two rallies have already been held at Belfast City Hall over the past week in support of Palestinians.