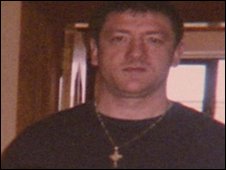 A HIGH Court judge has today ruled that the Public Prosecution Serivce breached  human rights laws by failing to comply its own policies on dealing with victims.

Mr Justice Seamus Treacy’s judgment follows the decision of the court on July 9 this year that the PPS had breached its Victims and Witnesses Policy.

He ruled the PPS failed to explain the decision to accept lesser guilty pleas to the family of murder victim Gerard Devlin before the decision was announced in  court.

The decision was welcomed by the victim’s frail mother but she said it did not change the fact that those involved in his killing got away with a “slap on the wrists”.

Mr Devlin was  fatally stabbed on February 3, 2006 in west Belfast.

Five members of the extended Notarantonio  family were charged with murder and related offences.

On the day the trial was due to start on September 24, 2008, the defendants entered guilty pleas to lesser charges of:

In July, Mr Justice  Treacy held that the PPS had failed to comply with its own policy by not providing the family with the explanation to which they were entitled under the  PPS Code of Practice and the Victims and Witness policy.

Today, Mr Justice  Treacy held that that failure constituted a breach of Article 8 of the European  Convention on Human Rights which provides that everyone has a right to respect to private and family life and that there shall be no interference by a public  authority to the exercise of that right.

The Judge said that Article 8 not only  protects individuals against interference with private and family life but also places a positive obligation on the state to demonstrate respect for them.

He said that promulgation of a policy was insufficient to fulfil that positive obligation.

Mr Justice Treacy said that to be effective, rights protected by the Convention must be seen to be operational in the lives of citizens and that he was not persuaded that Ms McMahon would have felt her rights protected by the mere existence of a policy document breached on the day she attended court for  the trial of her partners alleged killers.

He added: “In my view the right of the  partner of a person whose life is unlawfully taken to be appropriately involved  in and informed about  prosecutorial  decisions concerning that death does properly come within that broad range of  interests protected by Article 8. Adherence to the Code of Practice and Victims  Policy which applied in this case could have ensured that the respondent did  demonstrate appropriate respect for this victim’s protected interest.

“The PPS chose not to adhere to its own guidance documents and I find that, in the  difficult circumstances of this case, that choice did constitute a breach of  Article 8.”

He found found that Ms McMahon, as the murder victim’s partner, was covered by the legislation.

Outside the court, Mr Devlin’s mother Mary described the verdict as vindication for the family’s decision to bring a legal challenge over their treatment by the PPS. 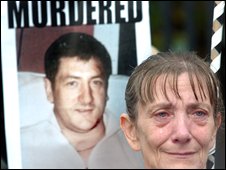 She said: “The fact remains that our son was murdered and those that murdered him got away with a slap on the wrist.

“Meanwhile the family are left to serve a life sentence. This is not, and never should be, justice.”