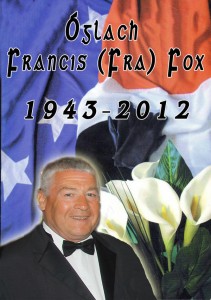 HUNDREDS of people attended the funeral this morning of IRA veteran Fra Fox.

Senior Sinn Fein figures along with scores of IRA men turned out for the funeral at St Oliver Plunkett Church in Belfast.

The 69-year-old was a personal friend of former IRA leader Brian Keenan.

Scores of IRA men also attended the funeral of Fox who was a member of the Felons Club in Andersonstown, west Belfast.

Scores of death notices were placed for Fra Fox senior, including one from senior IRA figure Sean ‘Spike’ Murray.

He was later buried in a cemetery in Hannahstown.