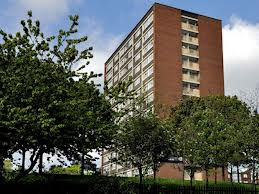 PSNI detectives have detained a man over an arson attacks on a block of flats in a loyalist area of north Belfast earlier today.

The blaze broke out at Ross House at Mount Vernon began shortly after 2.30am.

Fire crews treated a man who lived in the flat at the scene for a small burn to his hand.

He was alerted to the blaze when the property’s fire alarms were triggered.

A 22-year-old man has been arrested on suspicion of arson with intent to endanger life.