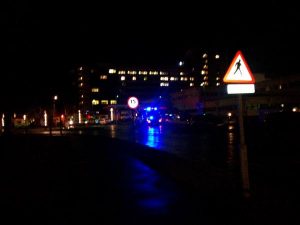 INVESTIGATIONS are to begin into what started a fire in a hospital’s plant room on Friday night.

Emergency services rushed to the scene of the blaze at Altnagelvin Hospital in Derry/Londonderry .

SDLP MLA Pat Ramsey said a full investigation needs to be carried out into the safety of the entire hospital.

Only a fortnight ago there was another fire at the same hospital.

Investigations will be carried out by the Fire and Rescue Service, the PSNI, the Health and Safety Executit, along with the hospital’s manageent trust.

Up to 50 fire fighters and 11 fire tenders were called to the scene following reports of a fire on the roof of the building.

At one stage, there were reports of “chaotic scenes” at the hospital.

The chairman of the trust, Gerard Guckian said all patients were “comfortable and safe”.

“Ward managers are in the process of contacting family and relatives of those patients that have been relocated as a result of the incident.

“I would like to thank all the emergency services and our staff who acted swiftly to bring the situation under control.”

As fire crews were dealing with the blaze on the 11th floor, a boiler burst on top floor bursting water tanks and pipes.

A source said: “It started out as a small fire but with the boiler bursting it burst nearby water tanks and pipes.

“It brought down a torrent of water from the 10th floor down another six floors.

“As this was happening staff were trying to evacuate patients. They did a magnificent job.”

It is understood up to 120 patients were affected on the wards which were not only flood but some suffered smoke damage.

Good Samaritan bus drivers from Translink turned up to help ferry patients to the rear of the hospital until the situation is under control.

One Fermanagh patient was taken to the the acute hospital back in her own county for treatment.

And the Trust also asked visitors not to come onto the site until the situation is brought under control.

Derry City Council placed Lisnaglevin Leisure Centre on standby if it is needed by the Western Trust in an emergency.

And Northern Ireland Water has been contacted by the Trust to keep an eye on the hospital’s pressure.

Councillor Gary Middleton said tonight: “I was told by police that fire was visible. They are still saying that. I’m at scene and can’t see fire.”

NI Ambulance Service say hospitals throughout Northern Ireland and in Donegal have been informed and are on stand ready to receive patients if necessary.

Just over two weeks ago, two wards in Altnagelvin were evacuated after a small fire broke out in an electrical switch room.

Twenty patients were moved to other parts of the hospital while 30 firefighters brought the blaze under control on 6 November.