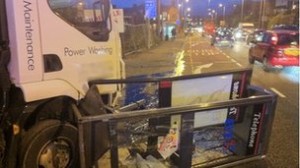 Accident on the Saintfield Road

A 40-year-old man has been arrested after his street sweeper lorry crashed into several vehicles on the outskirts of south Belfast.

The lorry he was driving was in collision with a set of traffic lights, a telegraph pole and several cars before it crashed into a telephone box.

The accident led to a traffic snarl up during rush hour traffic.

Police were called to the scene following the incident around 4.30 pm on the Saintfield Road.

The driver was treated at the scene by paramedics and he was later arrested on suspicion of dangerous driving.

The crash caused a traffic jam and police were forced to close the citybound lane of the Purdysburn Road at Translink’s Cairns Hill Park and Ride in a bid to clear the scene.